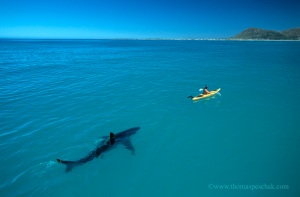 Over fifty thousand hits in the eleven months since this blog started. And in the year up to August 2012 that more than doubled to 110,000 a year and now in 2016 it’s over 800,000. Sounds impressive. Some days I get more hits here than on my well-established book sites which have been around for years. The world must be going IK-ing crazy for Inflatable Kayaks and Packrafts.
I don’t think so. I’ll let you into a secret, it’s all [back then] down to ‘shark attacks‘. Even writing those two words along with the cheeky exploi-tagging below ought to make this trivial post go ballistic (actually it didn’t). In fact I hereby christen the practice of tagging websites and blogs with ‘shark attack’ refs in an effort to artificially rack up hits.

At the time of this post, most days my most hit upon page by far is Walking with Sharks, the story of a kayaking trip we did a few years ago in Shark Bay, Western Australia. Versions of that yarn have appeared on a couple of websites and magazines, and I once gave a slide talk on it to six people at a kayaking show. At one point recently Walking accounted for a third of my all-time hits (left); now it’s slipped down to 25% as newer posts pile up. It’s a good yarn, but I don’t believe that’s why it’s so popular.

The secret seems to be that it innocently mentions the word ‘shark’ and even combines ‘shark’ with ‘attack’. That phrase has been top of the search terms which direct people to this blog (right), twenty times more than the next term. And look, the other day the top five searches all had pointy teeth and fins (left)! How disappointed they must all be to find a load of crap about inflatable boats! The odd thing is, Googling ‘shark attack’ today returned 46 million results in 0.18 seconds – and my Shark Bay story must be way down in the lower 46th million on the Google results page. Perhaps people accidentally land here via the ‘I’m Feeling Lucky’ option.

So my tip for your hit-seeking missives. Want more visitors on your WordPress blog? Slip in a few ‘shark attacks’, help yourself to some of my suggested tags below and check your oxygen because you’re going viral.
Here’s an appropriately exploitational image to satiate the seekers of shark gore who’ve bothered reading this far. One that ever since the original Jaws movie, must sum up the fascination among a certain segment of the largely teenage male population with The Beast – ideally ravaging The Maiden, in a Bikini, why not. Nice lilo, but – is that Nitrilon, Hypalon or a PVC cheapie?