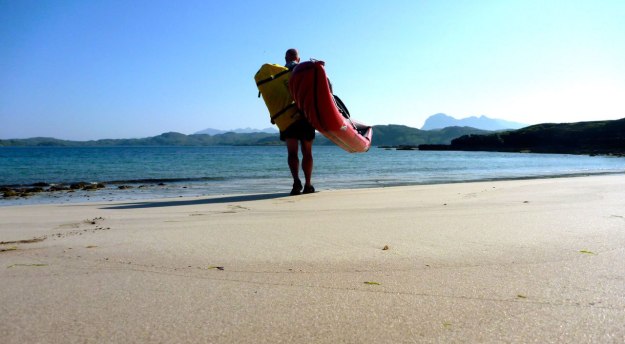 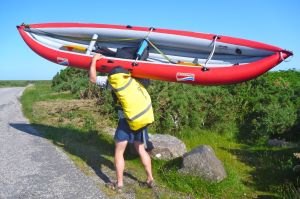 The heatwave which we hear has been tormenting the southerners finally crept onto the Coigach last weekend, like an overdue dog looking for its dinner. Warm, sunny and no wind. Hallelui-yay! 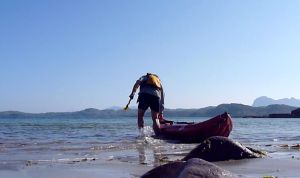 I planned to diligently hug the coast east round to Polly Bay were the Polly river drained Sionasgaig Loch, a fun stage which I packrafted last year. But once I actually got out on the water Green Island looked a doable 2km across mackerel-infested water rippled by an easterly breeze, so I took the direct line with wavelets slapping at my boat.
This was my first long solo run in the Amigo and initially the usual neuroses bobbed to the surface: ‘must get a paddle leash’; ‘what if fish farm toxins have caused mackerel to mutate into piranhas’…

and so on. In fact the biggest problem was the heat. I’d put in already dripping from the walk to the beach and would stay like that for most of the day. They’d forecast a pleasant 21 but I’d guess it got well over 25. 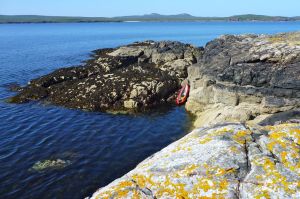 By the time I pulled alongside Green Island I’d calmed down enough to spare time for a quick look around. Finding a place to get out elegantly without slithering across a web of slimy boulder-covered seaweed was tricky, so I jammed the Amigo up a barnacle-covered slot and stumbled ashore.
These tiny, uninhabited and unsheeped islands preserve a unique ecology, or a least a distinct botany that makes them look different to the mainland. I climbed over the sooty lichen rocks into the sweeping grass and wild flowers, causing an avian scramble, and 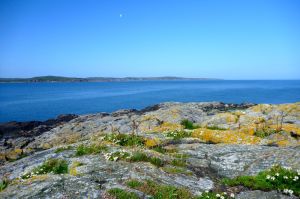 a few minutes later planted a footprint on the 20-metre summit. I looked all around and as before, imagine Newfoundland was like this, a wild, windswept panorama under a pale northern sky with a surrounding coastline ground down by long-extinct ice caps. To the east was a sandy beach at Polly Bay – one for next time – with Suilven rising behind. In the other direction was Rubha Coigach which I was also eyeing up as a paddle during this calm spell. 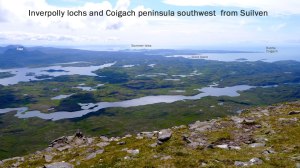 Heading back to the boat (‘what if it’s drifted off…?’) I came across a lone pink Croc flung into the grass during an especially violent winter storm.
I headed for the mainland, squeezing between an islet to what looked like a dormant fish farm above Rubha Phollaidgh (‘Dun’ on the map). We’d cycled to this point a couple of weeks ago, following the private road past Inverpolly Lodge which controls the freshwater loch fishing around here. Pushbiking seemed safely innocuous, but you’re never quite sure if some irate ghillie in a tartan strop will come after you. I’ve read of kayakers getting aggro for trying to put in at that bay.

As I left the bay something felt wrong, had I caught some weed in the skeg, was the boat going flat or a current suddenly against me? There was no sensation of speed as I clawed at the water although I was moving. I checked the GPS – 4mph, good enough. It seems the 4mph breeze was now directly behind me and I was paddling in a bubble of perfectly still air – never noticed that before. I became uncomfortably hot and soon began pouring with sweat; the insulating pfd didn’t help. On a day like today adapting the pfd to hold a 2-litre bladder loaded with Nuun tablets was a good idea, but it reminded me how much more satisfying it always felt paddling into a wind, even if you weren’t going so fast. 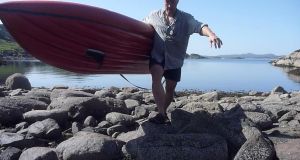 The single-track WMR comes right down to the sea at a bay known as Loch an Eisg Brachaigh. When driving or cycling by I’d long wanted an excuse to splash a paddle around here; it looked like a magical sheltered place. From the south the map showed a short cut into the bay over an isthmus linking the tidal isle of Rubha Bhrocaire. Had I arrived at high water I might just have scraped over with a few inches to spare. As it was, my timing was right off, but a wee portage (right) is always good for the legs and the bladder. 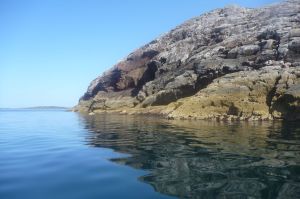 I plopped around the bay’s islets, scaring a seal that may have been a glistening mermaid just moments earlier. I seemed to be making better time than expected, too. Closer to the shore I was in the lee of the breeze and gliding over a flat calm. But it sure was hot and my eyes were permanently stinging with sweat which I presumed a sea wash would do little to alleviate.
North of here the rocky, cove-riddled shore lead round to another deep inlet; the hamlet of Inverkirkaig on the WMR. A short, steep river ends here, running off Fionn Loch below Suilven and another great packrafting excursion, although the river itself seems usually too boney to packraft for more than a short distance. 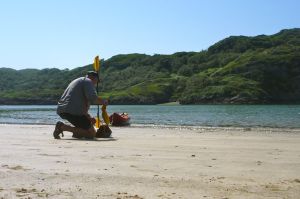 Less than two-and-a-half hours from Garvie, I paddled in at low water where I found it was too much of an ankle-twisting bother to get to the distant shore and a bench. All around was manky seaweed so I satisfied myself with a desalinating rinse in the estuary and headed back out for lunch on a sandy beach on the north side.
Refuelled, I decided sod this pfd, I’m as likely to drown in my own sweat and the RNLI would be stretched to the limit on a day like today. So i stripped off and cooled right down. At the rate I was going I was looking good to meet the Mrs passing through Lochinver at 3pm and turned Kirkaig Point for the final 2.5 miles into Lochinver seafront. 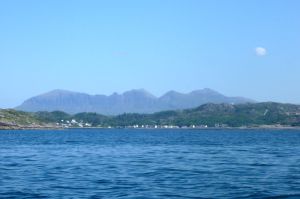 On the way in I got a striking view of Quinaig mountain (left) which rises over 800m like the rim of a crater behind Lochinver town. (A couple of days later we walked the three summits of Quinaig – definitely one of the best of the Assynt mountains.) And south of that was the reliable dome of Suilven behind Strathan hamlet, also a great climb as is well known.
Past the harbour and marina and the  baronial Victorian edifice of the Culag Hotel which had the misfortune to have an ugly fish factory built right in front of it. There are more nice old pics of Lochinver here. 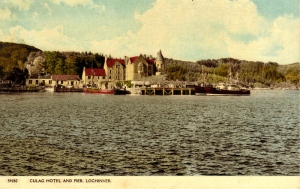 So there we have it. Calm conditions or perhaps a pessimistic estimate meant I got to Lochinver at 2.10, just 4.5 hours from put in. The GPS logged 3.5 paddling hours and a 3.1 mph moving average over 11 miles. Peak speed was an unnoticed 4.6 coming in with the tide into Lochinver. In fact that compares well with the only other long run I’ve done here: Ullapool run, though that was into the wind at times and clocked up 15 miles.
Conditions this time couldn’t have been easier; it’s so often windy up here compared to just 60 miles down the coast in the vicinity of Skye. I felt like I could have paddled any open crossing that day and so Enard Bay proved a bit of an anticlimax. The Amigo didn’t feel especially slow or tiring to paddle just because it’s not a K40, and so now I have a better idea of what the Grabner can manage in a day. 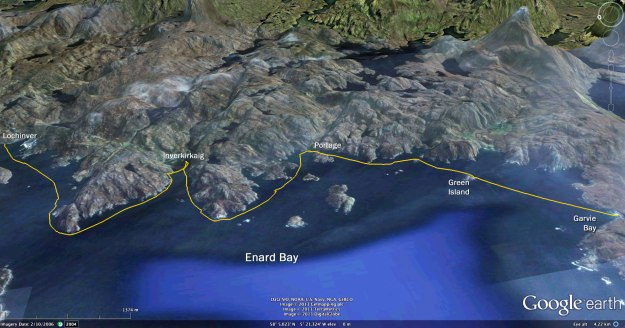 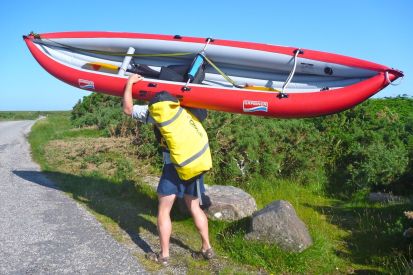 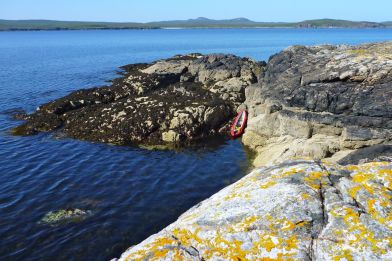 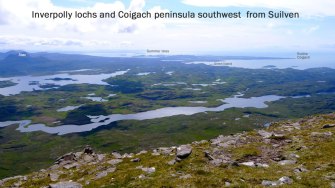 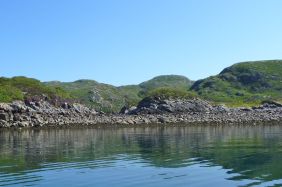 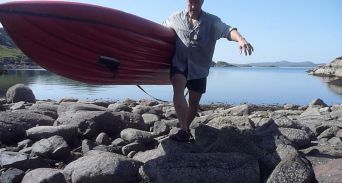 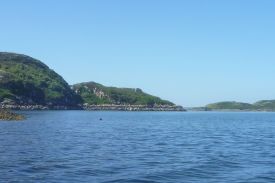 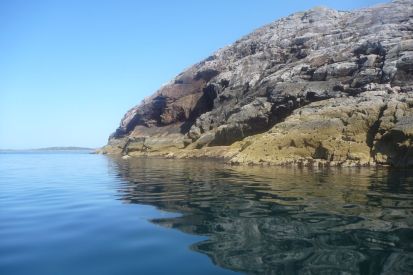 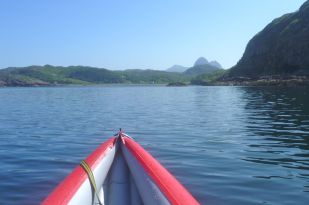 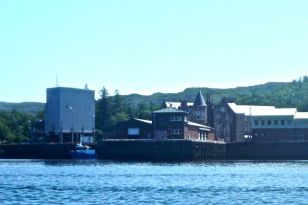 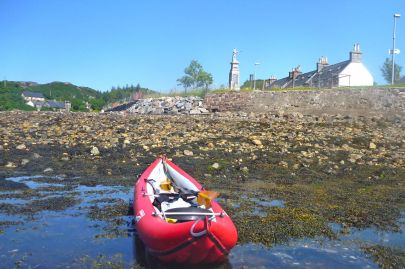 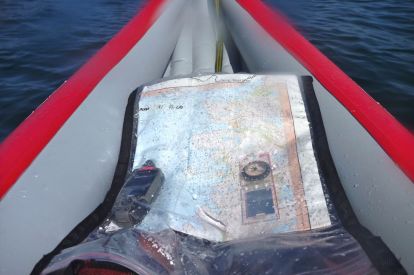 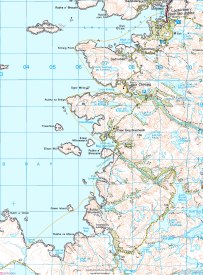