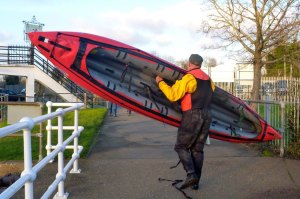 My current Gumotex Seawave is a well spec’d IK for my sort of inshore paddling and occasional touring, especially as it’s factory rated to run at a higher-than-usual 0.25bar or 3.6psi (normal is 0.2 on Helios, Palava, 410C, etc). That means greater rigidity which adds up to less longitudinal sag caused by paddler weight (who, me?!) and also better glide. My previous Amigo and Incept both ran an even higher 0.3 bar, and it’s said that this Gumotex can also be pushed to that sort of pressure on the side tubes without risking damaging the structure. Factory hull pressures are set on the conservative side, perhaps to limit warranty claims.
Like all the Gumboats I’ve owned, the more vulnerable I-beam floor chamber has a factory-fitted PRV, presumably set at 0.25bar/3.6psi (confirmed below). PRVs are important here as if an IK gets hot (typically out of the water on a sunny day) internal air pressure can increase to the point where seams can separate or the boat can blow. If separation happens to an internal I-beam in the floor it will balloon up and make for a very difficult repair. I would not meddle with the factory-set PRV in the Seawave’s floor.

In a discussion with a French Gumtexer, he suggested that Gumotex use the same orange dot  0.243 PRVs in all their boats, irrespective of the stated official rating which is either ‘0.2’ like most or ‘0.25’ like the Seawave. He sent me a photo of his 2016 Palava floor PRV (right) – orangey-pink, same as my Seawave and classified by Ceredi as 0.243.
Officially the Palava is a ‘normal pressure’ 0.2 bar canoe. Upshot? Your Gumboat’s floor may be rated at higher pressure than you think or is officially stated and you’d assume the tubed sides can handle at least as much pressure. Then again, in the table below, Ceredi state the orange PRV  will open between 0.21 and 0.243 so perhaps we all just need to calm down a bit.

PRVs use springs set to purge air before it reaches structure-damaging levels. Then again, my Amigo had no PRVs at all so you assume Grabner were confident their floor construction was solid enough to handle occasional neglect. But I’ve been caught out before and always try to ensure a boat remains in the cooling water when moored up on hot days – even getting up to throw on a cooling splash as the sides tighten up like a drum. 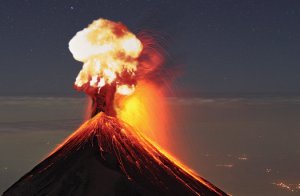 Like most IKs with single side tubes, my Seawave had no PRVs in the side tubes as the rounded profile can handle higher pressures better than a flat, ‘lilo-like’ floor. However, if you’re planning to run them over-pressure as I am suggesting, that could be risky. The answer: fit PRVs in the two side chambers – just like my old Incept. That way you can safely leave you IK out of the water in the tropics, go and hike up a volcano (which could be called ‘the planet’s ‘PRVs’) knowing that all three chambers on your IK will harmlessly purge any excess pressure. Sure, when it all cools again the boat may be saggy, but better a quick top up with your K-Pump than pulling bits of shredded Nitrilon out of the palm trees.

Ideally I was looking for a PRV set at a reasonable 30% over the factory figure of 0.25 bar – i.e.: something around 0.33 bar or 4.8psi.
Well-known IK valve-makers Leafield and Halkey didn’t make anything matching my needs (or don’t sell to individuals). The Seawave’s valves are stamped ‘Ceredi Italy’ and once I managed to track them down online, I saw the same Ceredi 6600 PRV series came in options including Red 4.78 psi or 0.33 bar, (left and below). In the UK they were a special order via IBS and cost £35 a pair posted.

I admit that the colours look pretty close
but it’s pinky-orange for the OE floor and red for my 0.33s

Short version
• Choose your spot, mark and then cut a 37mm hole in each side chamber. The Ceredi-suggested 35mm was not enough
• Remove the side chamber’s main inflation valve with the tool
• Squeeze the PRV’s threaded back collar through the bigger inflation valve hole, shuffle it over to the 37mm hole and screw on the external part of the PRV by hand
• Reassemble the inflation valve and tighten both valves with the tool
• Fit push-on caps to the PRVs
• Pump up and check for leaks. Maybe retighten some valves with tool 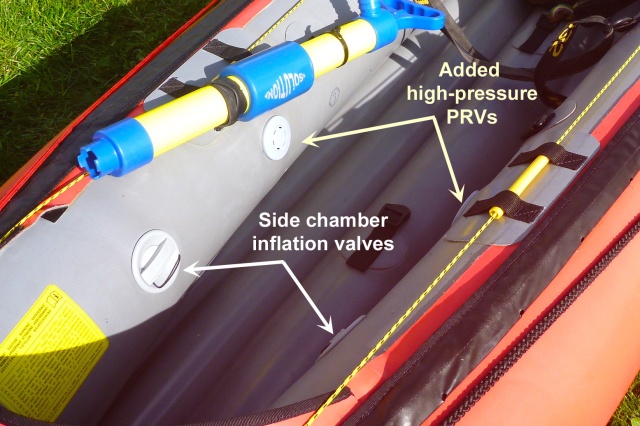 Long version I chose to fit the PRVs close to the inflation valves and at about the same level. There are mysterious markings on the inside of the Seawave to aid symmetrical positioning (Pic 2, below).

I used a narrow-bladed knife and of course took care to gather up the hull skin so I wouldn’t inadvertently puncture the other side of the side tube. I assumed the 35mm hole would be big enough to take the back nut. When it wasn’t I was a bit flummoxed. Now I had a gaping hole in my boat, but no way of getting the back of the PRV inside the boat without performing a Caesarian on my Seawave. Luckily two brain cells dropped into my Hadron Collider and it occurred to me that once, removed, the nearby main inflation valve’s hole might be bigger. And it was – just.
One valve was extremely hard to undo. I wondered if it had mistakenly been glued in or that the plastic valve removal tool would snap. When the other side undid with less effort I knew it had to be possible.
Another problem is that the internal collar or nut is only 10cm deep (pic 4, below) and so was hard to grab through the hull fabric. Until I realised this, I was grabbing the inside part of the outer valve body which screws through the collar from the outside. Trying to ‘unscrew’ the valve body from itself is like trying to pull you head off –  eventually  the valve tool would break. Another ‘Higgs boson’ moment came over me and I realised that by chance the two valve holes in the boat were close enough for me to get some water-pump pliers in there, grab the back collar and finish the job (pic 6, below). After that, no more problems. One thing I noticed while doing all this was the unseen protective patch on the inside of the hull opposite the inflation valves to limit wear and rubbing between valve body and hull when the boat’s delated. Nice touch, Gumotex ;-)
I did all the valves up as hard as possible with tool and hand, and in a year or three have has no problems. On a hot day in the sun I can hear the high-pressure side PRVs hissing away. The gallery below shows the job in chronological order. 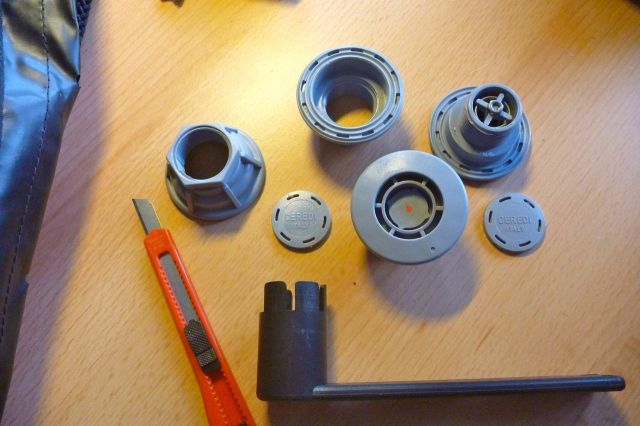 The bits you need

Incision, but the right-sized 37-mm hole is too small to pass through the ’35mm’ PRV back collar 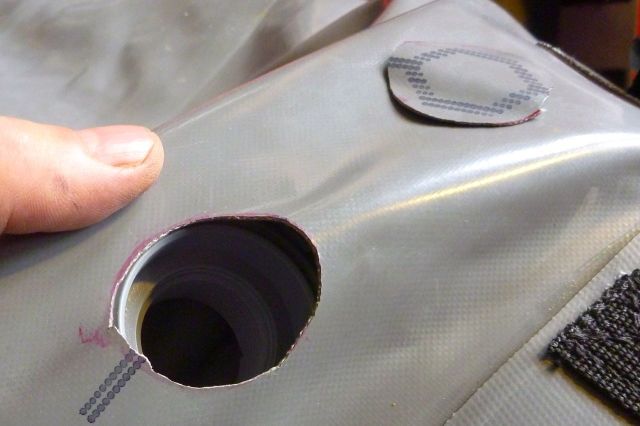 37mm hole is better, but still not wide enough to pass through the inside ‘retaining nut’ of PRV assembly

You need to remove the main inflation valve  (it’s hard to grab the inside part by hand). Then the PRV back nut just squeezes through main valve hole and can be shuffled along towards the new hole 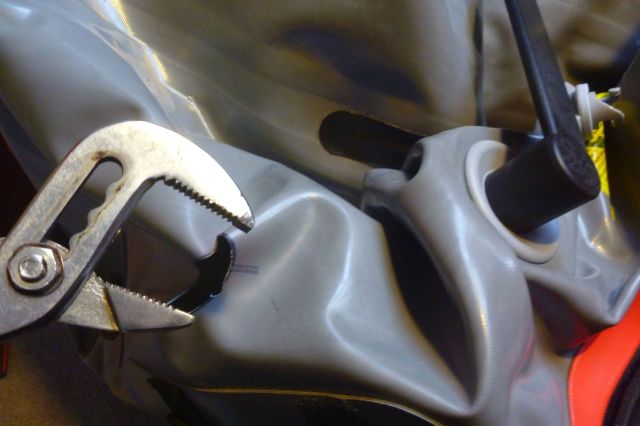 Holding the PRV back nut in place to tighten is hard by hand. So pass pliers through the main valve hole… 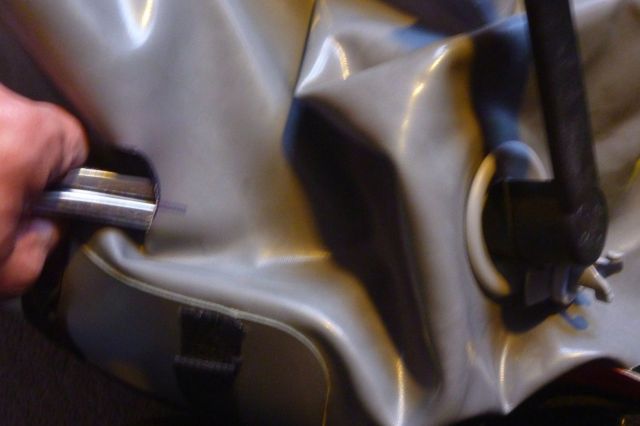 … to clamp onto the back of the PRV assembly. This is why it helps to cut the PRV hole close to the main valve

Clamp them all up 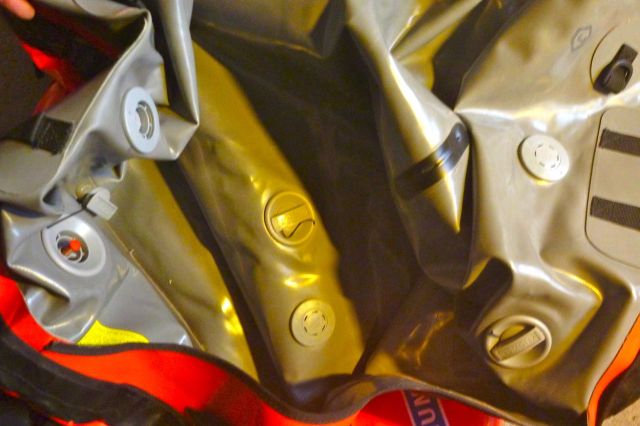 PRVs as far as the eye can see

Now it’ll be good know that should I doze off as the tide ebbs away, I won’t be rudely woken by an exploding boat.

33 Responses to Fitting 4.8 psi PRVs on a Gumotex Seawave