Ten minutes after a paddling away from a tranquil Swanage seafront bathed in a Turneresque light (above), we found ourselves battling a stiff breeze rolling off the Ballard Downs on the north edge of Swanage Bay.
The odd whitecap scurried by, a sign that the IK Limit was not far away. This felt like more than the predicted 10mph northerly. We dug onward, and once tucked below the cliffs the pounding eased. The northerly was probably amplified as it rushed down the south slope of the Downs and hit the sea. We’d paddled through that turbid patch – a bit of a shock before breakfast. What would it be like once out in the open round Ballard Point? Mutiny was afoot.

“Let’s see how it is round the corner, then decide,” I informed the crew.
“Aye aye, cap’n sir.”

We eased around the corner expecting the worst, but were greeted by a magical sight: a line of 200-foot high chalk cliffs receding to a distant group of stacks and pinnacles glowing in the soft morning light and all soothed by a gentle breeze. 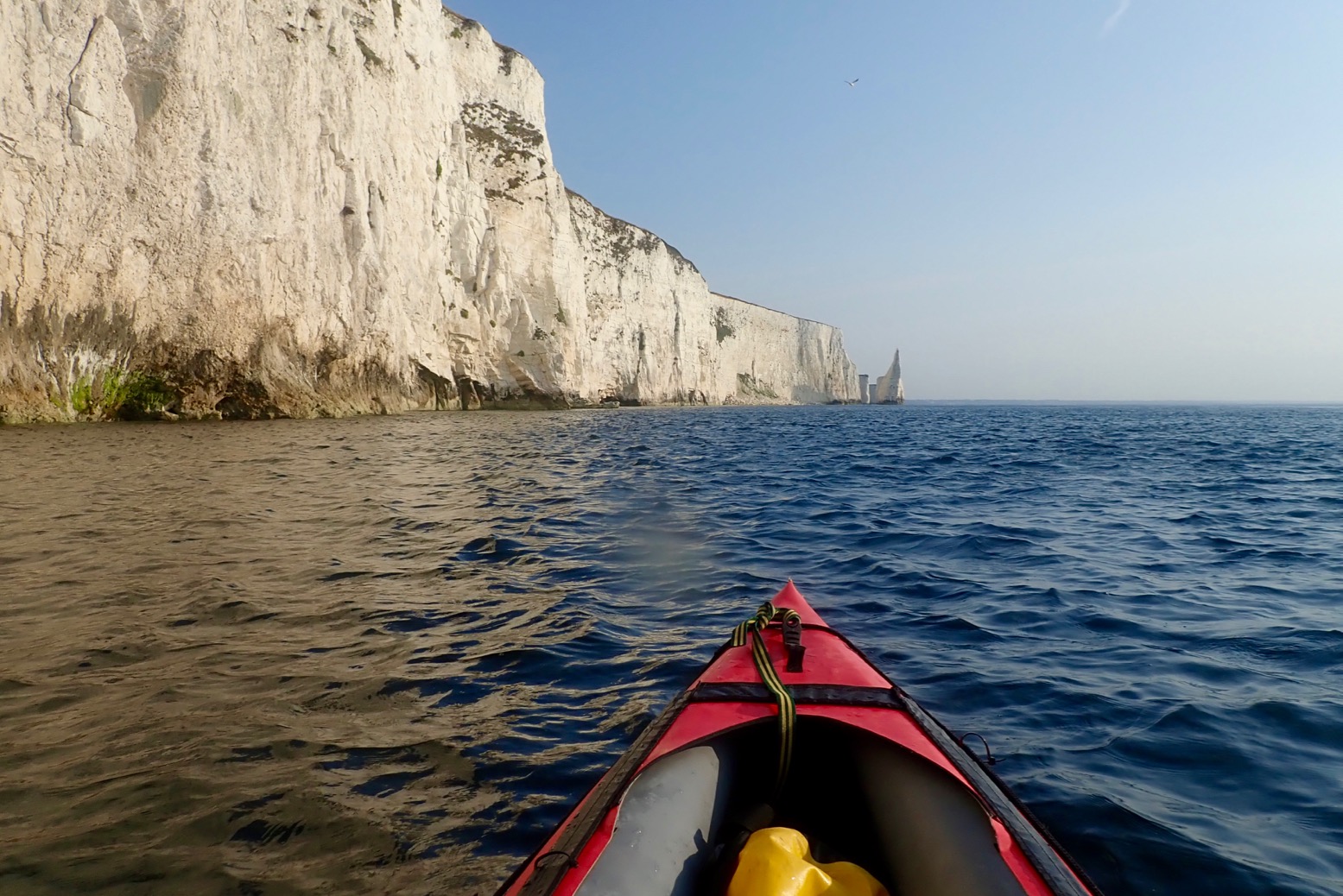 It was only a mile from here to Handfast Point aka: Old Harry, passing several stacks, arches, caves and slots. Ever the goldfish in its bowl, I’d got distracted before looking up tide times, but judging by yesterday evening’s paddle around Brownsea Island in nearby Poole Harbour, it was a couple of hours into its southerly ebb. We arrived at Harry’s about mid-tide but with still just enough water to paddle through most of the arches as well as some narrow slots which were already running too fast to tackle against the flow (below). A bit of a tidal race swirled past the Point, but nothing dramatic.

I’ve been planning to do Swanage for years and it was even better than expected. It must have been packed out yesterday on the bank holiday, but today, before 9am we had the place to ourselves. It’s a fascinating geological formation and all the better explored from a paddleboat.

Lit by a rising sun and on the top half of the tide must be ideal timing for a visit here. All up, it was only a two-hour roundtrip from Swanage seafront and in similarly good conditions would be easily packraftable from the north off nearby Studland beach.

Hope to paddle this again, one time.PS: Little did I know that this summer 2019 paddle would be out last sea paddle in the Seawave. Not since my original Gumo Sunny on which I learned and did so much, have I owned an IK for so long and had such fun times. What a great boat that was.