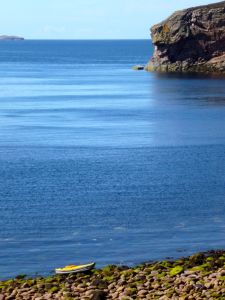 A sunny and wind-free

morning coincided with the definitive wrapping up of my current job that’s dragged on for years. I could not pack up the gear quick enough before the calm spell flipped. And this time I wasn’t messing about – I was going to paddle right around Tanera Mor! All of a mile off shore it is, but you never know what to expect on the unseen ‘ocean’ side.
Just before midday I stuck out for Rhuba Dubh Dubh, the island’s most easterly point (see map, above) and would decide how things went from there. Less than half an hour of speedy, flat-water paddling I arrived at the point, the smokey blue Torridons brooding in the background and the creased and weathered sandstone cliffs to my right.

Rounding the bend to Tanera’s the south side I wasn’t hit by the expected churning swell and whirlpools but pressed on, reluctant to relax until there was something to relax about. That turned out to be the inlet of Mol Mor which invited me in for a walkabout.
It has to be said, at lower tide levels these islands don’t make getting ashore easy; a jumble of glistening wet, seaweed-draped boulders as big as melons bite at your ankles. And on proper land it’s no better, with more unseen ankle traps under the thick heather, or plain old sphagnum sludge juiced up from the recent rains. But as always, from a high point the little yellow boat down below looked striking. Green sea-over-sand and the far headlands of Wester Ross backing the tempting (but not today) outer Summer Isles of Eilean Dubh, Bottle Island and Priest Island with the distant strand of Mellon Udrigle shining bright. 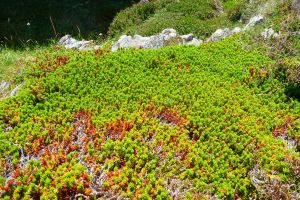 I clambered up to a pass for a view back north over the fish farm to Achiltibuie and the loaf of Suilven behind. Must go back up there one time soon. On the water again I turned up between Tanera Beag where a north wind had come up and gave me something to get stuck into. I didn’t want to push my luck but to string things out I popped onto one of the three islands north of Fada Mor which become one mass at low tide. Causing a seabird commotion overhead, I crawled to a high point and took in another great view back at the Fisherfield   and Torridons. As on Tanera, the colours of the vegetation jumped out at me – was it the light, the recent rains after a long dry spell or just my shades?  All that remained was a hack over to Dornie and back to Whalebone beach (now all gone). It was just beginning to whitecap which I regard as the red flag, especially when blowing from behind.

The spray kicked up over the sides but at times like these I’m reassured by the K40’s reliable turn of speed – about 3.5mph the read out said. It’s good to know it can be done, even if most of the time I prefer bumbling around in calmer weather, looking at stuff.
Once over, I pottered back tucked under the mainland shore out of the wind. A beaky oyster catcher eyed me suspiciously just as I neared the beach where a guy setting out with his toddler on his Sevy 200, doubtless the only two IKs for miles around. A few more days like that please, Mr Weatherman. 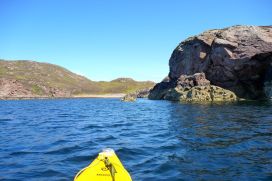 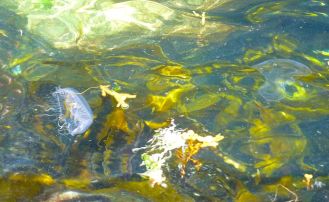