Another calm day, another island paddled around; a quick one to Horse Island which I visited last year. On that occasion the two islands of Horse and the smaller Meall nan Gabhar were separated by a stony, seaweed-drapped causeway. Today, leaving Badentarbet beach 40 minutes after HW, I expected to paddle between the two.
On the way out I noticed that the way I’d clipped the new backrest was not so good, so at Runha Dunan point (map left) I pulled over to try something less bad (right).

I definitely need to come up with something better, and for the rest of the trip avoided leaning against the strap for fear of damaging the lugs. That may have contributed to the fatigue, if not actual low speeds (see below). Expensive but stout Grabner D-rings and an SoT backrest are on the way.

At 2.7 miles out a wide channel separated Horse from its northern neighbour (left). In the absence of distracting wind and at today’s tide (3.6m, max can be 4.7) I wanted to see if I could detect any currents in places like this channel. Maybe not yet only 1.5 hours after HW, but by the time I closed the loop a flow – I imagined against me from east to west – ought to be noticeable. 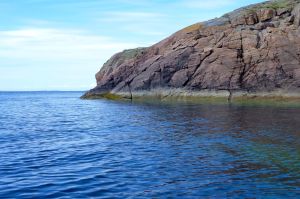 Down the inland side of the Horse I passed the small seal colony (left) we spotted on our way to Ullapool last year. And at around 70 minutes and 4 miles out I turned

around the south end of Horse Island (left) and experienced the slight turbulence I expected, possibly as the tide flowed round the point against a rising southwest breeze.
Up the outside of the Island I felt a bit exposed so pressed on against the chop and as I returned to the gap from the south side the back end of the kayak kicked out a bit. A ha, something’s happening two hours after high water, getting through the gap may be a struggle. I felt the nose of the boat pull off course unless I kept straight on against an imagined current. But as the speed graph shows, I was actually going faster than an hour 20 minutes earlier and the seaweed below wasn’t showing any signs of flow, so if anything it was a light current pushing the back around. All very confusing. Perhaps the ebbing tide backing out of Loch Broom around the island creates a back eddy through Horse Channel.

The fifty-minute paddle back to the beach turned into quite a haul, but that’s the way I like it sometimes and somewhere on this stage the GPS’s trip log (if not the track log, left) recorded the magical 5 mph!
All up, 8.1 miles in 2 hours 20 at a moving average of 3.5 mph. About 10% faster than my other solo trips over the last week to Lochinver and around Rubha Coigach, but as a training run and without a proper back rest, the effort wore me out. As for tides and tidal movements, for the moment I remain baffled.