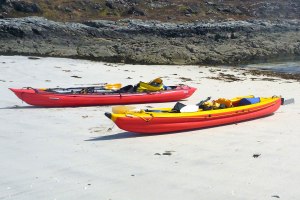 I own a Gumotex Seawave and a couple of years ago had the Incept K40 for a year or more. IMO these are two of the best IKs around for sea kayaking and touring.
Like my recent paddle with my former Grabner Amigo, a longer trip with a K40 also gave me a chance to reappraise the pros and cons of these two IKs. Gael’s red K40 is the same one I tested in 2012.

As you can see in the table, the Nitrilon Seawave is a little longer, quite a lot wider but less spacious inside. It claims a much greater payload, has space for up to 2.5 paddlers as well as fitting an optional fully removable deck and a fixed skeg.
The K40 is made from a stiffer ‘PVC-urethane alloy’ fabric, has a zip-up/roll-back deck, a rudder and a single seat. The twin side-beam hull explains its slimness as well as the greater internal width. Both these IKs weigh around 17kg.
New Zealand-made Incepts are hard to find in Europe or the US. One price in Germany today quotes €2500, while a Seawave with an optional deck comes in at £995 in the UK or from less than £700 when boatpark.cz were having a sale.

Out of the bag the Incept runs PRVs rated at 5 psi or 0.34 bar on all three chambers, with inflation valves handily located around the cockpit. I’ve adapted my Seawave to run all-round PRVs too, all rated at 4.78 psi or 0.33 bar. Even then, loaded up I could feel my kayak flexing a little in the briny swell bouncing off the Ross of Mull.
Paddling with the K40 for a couple of days, I got the feeling it was a little faster than my Seawave. Gael’s K40 was loaded a little more heavily than my boat, but my added weight easily exceeded that. Both boats run similar pressures but the slimmer, stiffer fabric’d K40 has the advantage, even though it’s a little shorter. Gael may also have a more efficient paddling technique, but overall we agreed that in the windy conditions we were experiencing, it was his rudder which made the difference when it came to maintaining a steady speed, despite its slight drag deficit. (Good page explaining sea kayak rudders). 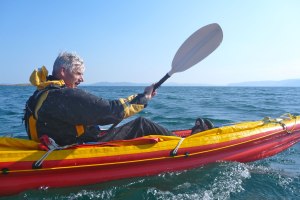 Simply put, with a bit of rudder correction to compensate for winds pushing the boat off course, Gael could carry on paddling full steam ahead. At the same time I had to correct my steering by yanking hard on the upwind arm and trailing the other to maintain a given course, so I was only powering with one and a bit arms. This gave the K40 the edge – say 5–10 minutes over an hour.
Running a Grabner Holiday Gael is a rudder fan and thinks adding one to a Seawave would make it a perfect IK. Me, I’m not so sure the added complexity and risk of breakage is worth the ease of balanced paddling, but I think I’m talking myself into it. As long as my system is not like the Incept’s horribly mushy rudder

actuation. It felt less effort to paddle Gael’s K40 than my wider Gumboat, but pushing hard on the inflatable pedals was a bit like using a cushion for a steering wheel.
A

great way to improve the K40 would be to be to fit something like a Grabner rudder (left): hard plastic pedals pivoting on a rigid bar. The actual pivoting- and rudder-lifting mechanism at the back looks like a standard sea kayak arrangement with a rudder pin.
We both agreed the K40’s generic hardshell rudder blade is too small for this boat when the seas get lumpy or the winds exceed F4. A

longer blade is needed, but that creates more drag. Better just to accept an IK limitations and not go out in those conditions, as I found once, though I’ve just remembered the skeg-steering idea a visitor suggested to me last year: pivoting the half inserted Gumotex skeg using cords (left) to fix an angle against a steady wind.

Especially when loaded, my Seawave’s fixed skeg can be a bit of a pain at the shore. You need to drag the boat in on a flowing tide but I don’t like the idea of the heavy IK pressing on the skeg unless it can gradually sink into the sand on an ebb. At other times I needed to find a rock, use my Pelicase or lean on the K40. But that’s all a small price to pay for the benefits the skeg brings at sea. I’ve thought of fitting a retracting/trailing skeg to get round this, but if I go that far I may as well try and install a rudder. Chinese SoT ones on ebay go for just 20 quid and it could help review my dormant sailing experiments which I recalling during the backwinds of Mull.
The other impression was the initial tippiness of the K40 – yikes, it’s been a while since I’ve experienced that. In fact it soon went away and anyway was helped by the thigh straps which again, I’m reminded don’t snag the knees as securely as my set ups in the Amigo and Seawave – possibly because the front mount is too far forward (using the rudder pedal

mounts). But then again, I should have bothered to adjust the rudder-footrest towards me a good few inches. just as Gael moved my footrest tube away to suit his longer legs when we swapped boats
As well as being narrower, the K40 gives the impression of a more box-like hull (left) with more prominent chines which aid edging. On a proper hardshell sea kayak edging can be used to turn the boat (lean right to turn left – no, I never got the hang of it either) but I doubt the K40’s hull was designed that precisely. A hardshell’s retractable skeg (where present) is used to carefully counteract the kayak’s weathercocking rather like a rudder.
I don’t recall steering using the K40’s edge (with the rudder up), edging was more a way to keep the boat level

with the help of the thigh straps when riding up side waves and to limit swamping. The rounded Seawave is more raft-like in its stability, as Gael soon noticed, but gets there in the end thanks to high pressures and a long waterline.
The Incept was also much more roomy thanks to the slim side tubes. That makes the thigh straps more important and I actually missed the packraft-like jammed-in feeling between my Gumotex’s fat side tubes. The seat didn’t feel as comfy and secure as the packraft/SoT set up on my Seawave and all-in-all, I felt a bit out of sorts in the Incept which helped me realise how well my Seawave is suited to my sort of paddling. About time – it’s taken a few IKs to get there.