Packboat kayaks on the River Spey

Posted on December 30, 2010 by apaddleinmypack

Here’s my gallery of a run down the Spey river we did one September in 2007; three days from Aviemore to the sea – about 85 kms or 53 miles, camping two nights. Me in my Sunny and a new dry suit, Steve in a Pouch tandem folding battleship, Dave in a Klepper folder and Jon in a red kayak made of rigid, hard plastic called a Carolina; quite robust and fast it was, but a bit heavy and not something he could transport easily on a bus. It remains to be seen if these ‘hard shells’ will catch on.
The Spey is a famous Scottish canoe run; it’s also famed for salmon fishing and its malt whiskey distilleries. Although the river is said to be open all year to paddlers (see the online guide below for details), when an estate is charging an overseas tourist hundreds of pounds a day to fish off their banks, they don’t want you getting too close and upsetting the client’s concentration. As far as we knew we were there on the last weekend of the salmon season and only once got waved away from a bank of anglers.

That year the river was a bit shallow in places, though none of us quite needed to get out and walk. Even then my Sunny filled on a couple of occasions, despite some piffling rapids, so a dry suit was a good call. Jon was the only one to fall out which just goes to show what lethal boats these SinKs can be – that thing is less than 26 inches wide!
It is of course very satisfying to follow a river down to the sea, watch it change and paddle right into to the waves (oddly the tides only reach in a few hundred metres at Spey Bay). Whatever boat you’re in it’s a great run with easy white water, and easy side access. Anything rated for a canoe is fine in an IK. ForDave unfortunately it all ended on the morning of Day 2 when his Klepper snagged on an embedded metal stake (an old fence 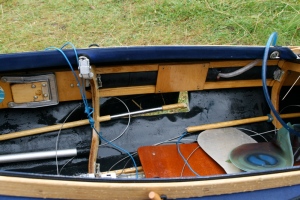 post?) and ripped a foot-long hole in his hull. Kleput! There’s a road close to the Spey all the way and he managed to get a lift back to his car and was there that night to drive us to the campsite in Aberlour, 2.5kms from the river. I do recall a very nice meal in the pub that night, in a bar with scores on malts lined up on the back shelf. Dave was also able to pick us up from Spey Bay where there’s a formica-era cafe. The nearest station is Elgin, about 13 miles away.
You could packraft the Spey too; it would be fast enough and if you combine it with the Loch Morar stage I packrafted last summer down to Gairlochy, after a 40-mile transit up the A86 to Newtonmore (20 miles upstream from Aviemore) you’ve completed a ~150-mile Scottish coast-to-coast run; Atlantic to the North Sea. I know of a couple of packrafters who have done most of it, including these two guys in the freezing winter of 2009-10.
Along with many other reports, there’s a detailed online guide here. Harveys make a waterproof  map of the Speyside Way walk which of course follows the river closely. 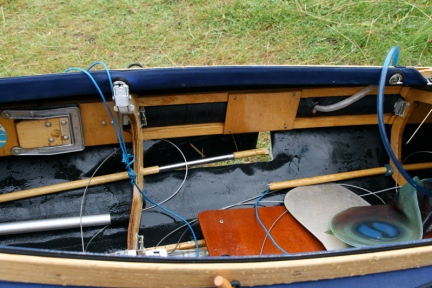 Dave’s Klepper catches a spike and is kleput

The fifty year old Puch needs a bit of bilgeing

The folders are lead to the water 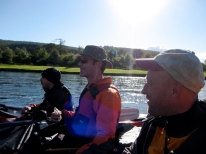 First night in a field behind a farm building

At the campsite in Aberdour 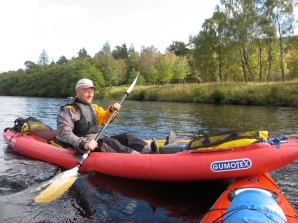 Let’s see how hard these ‘hard shells’ really are

‘I don’t have to worry about river spikes, me.’ 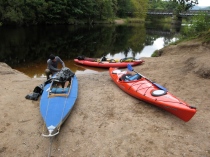 Put in at Aviemore

Steve drains the Sunny and hands it back 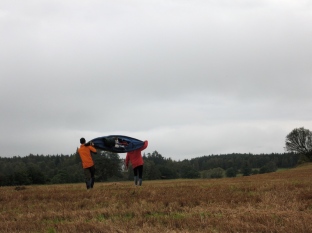 The injured Klepp is lead away by paramedics 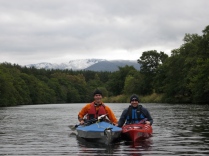 Jon heads into the North Sea 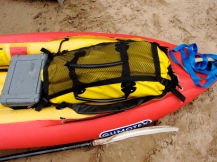 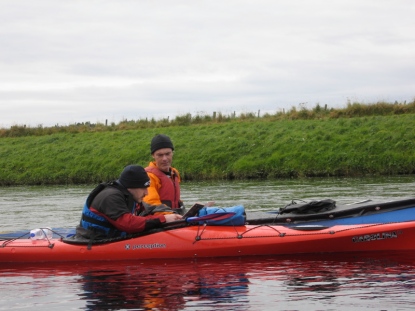 Snow on the Cairngorms at the back