See also this, a year later.

While dodging stray sheep and oncoming traffic along the ‘Wee Mad Road‘** that leads off the peninsula to the outside world, I often throw a pack-hopeful glance over to a creek called the Abhainn Osgaig.
It runs for a kilometre or two down from Loch Bad a Ghaill to Loch Osgaig, which in turn drains into the sea at Enard Bay. Most of the time what you can see from the road looks a bit boney, but the other day, following a week of gales and squalls, it was full enough to catch the eye. Driving back from a recce for another packrafting plan, I squelched over the bogs for a closer look, as most of it appeared hidden in a gorge. Sure enough, from some nasty-sounding sluices at the west end of Loch Bad, the river drops briefly into a narrow gorge you can’t even walk along. Viewed from the bottom end it was running hard enough to put me off. If I was thrown in I suppose I might surprise myself with some quick moves and get through without dumping, but I don’t fancy any white water that looks like it needs head protection. It’s a bit frustrating to be such a ninny; a creekboater wouldn’t shake a cag at this one, but I can just see myself flailing around like a squid in a blender, bouncing out of control from rock to rock. 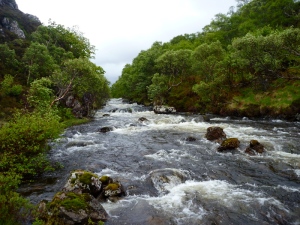 Below the gorge (2nd and 3rd pics, left) it spreads right out so even I could acquit myself; if anything it looks like I’d need to step out in the shallows once in a while.
Back in the car and driving on slowly, I spotted at least one more waterfall I’d not want to drop in on uninvited, but there’s plenty of room to walk round that one so it would be fun to bike out there one time, tramp upstream from Osgaig loch for a good sticky beak, and put back in for the 10-15-minute ride back down.
Although I’m always on the look-out, there aren’t many packworthy rivers close by, so while the Osgaig runs deep enough to float my boat – and at a time when it’s too windy to do any other boating of substance – that is this week’s mission in the Yak. Right now it’s pelting down again and the sea is heaving. I’ve just heard the Shipping Forecast out in the Atlantic (Rockall, Malin, etc) is F11, just below a hurricane so the prospects for rain and high water are good.

A few days later I got fed up waiting for a break in the weather – it’s the worst May for 37 years they say, and most of the time too windy for solo sea kayaking in my Incept. So we schleped up to the Osgaig between downpours, and I took a bit of a run at the lower half just below the uninviting waterfall. 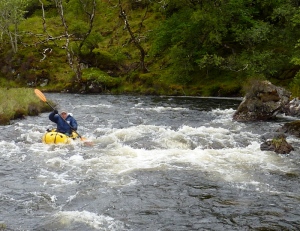 I miss the fun sensation of scooting down a river in a packraft, but I wasn’t really getting any this day. Even in what passes for spate round here, the Osgaig is just too shallow and I winced as the poor Yak scraped over

the boulders while being relieved I got Alpacka to spec it with a butt patch. Bouncing off, or hanging up on rocks lined me up all wrong at times, but in an Alpacka one firm pull lines you back up. Fact is there was no rhythm or flow and I felt like someone with a flash new toy desperate to find somewhere to play with it. It wasn’t even worth running the remainder of the river down to the loch.

Day-boating like this is not really my thing anyway. I’m more into pack-rafting and have a great one- or two-nighter lined up round the back when the cabin fever hits the red zone. Of course no one comes to Scotland for a sun tan,, but at least I have the Ardeche Gorge to look forward to in late July. No two ways about it, that will be a great run. See this: same river a year later.