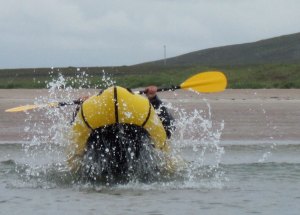 Sunday morning Jon and I went to try out his new boat, another Intex Sea Hawk, but the one-man version this time which goes on amazon for under 20 quid. For that money a pump is extra, but we managed to fill it up, though maybe not as firm as it could have been. Once inflated it dawned on me rather belatedly that the Sea Kork is indeed a row boat; and it’s not just the rollocks and the rocket launchers – sorry, rod holders – that give it away. It’s the fact that the rounded bow has, like a new Alpacka, a lot more volume – and so buoyancy – than its flat stern. This is a boat that you’re supposed to row facing backwards – like a rowing boat. If you sit at the less buoyant back end facing the bow the trim goes to pot, much like it could beon an old-shape Alpacka with  heavy person in it. Jon is only 80kg so could get away with it, but with me – in all my gear right on the Kork’s 100kg limit – I felt better kayak-paddling it backwards. Better trim (levelness) means less yawing.

We decided to go over to Achnahaird Beach (left, on a sunny day) were, as luck would have it, the surf was kicking off the scale with some rollers up to knee height and kept up by a light offshore breeze. I am joking of course,

but a few weeks ago the Achnahaird surf was looking pretty damn good (right) at up to a yard high, so even if today was a nothing special, it can be fun here. 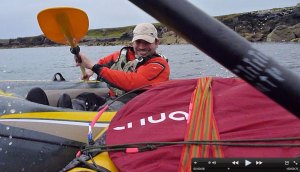 I can’t help laughing whenever I see an Intex in action, but it’s as much in amazement that you get so much boat for 20 quid. Out on the water, the first order of the day was to attack the Sea Hawk with the pointy bow of my yellow Phoenician warship (left). Poor Jon had only been 60 seconds in his brand new boat before I was trying to tip him over, like a log-rolling contest.

Kayak paddling from a standing start the Yak left the Sea Kork far behind – no great surprise there. Jon then took his TNP apart and tried rowing which ought to be more efficient and so faster. But all he did was a backward zig-zag; maybe that takes some practice – or a rowing boat.

By now we were nearing the surf zone where we spent the next hour having a laugh. Neither of us had ever tried this so the semi-surf was just right; we couldn’t tip our boats over whatever we tried, but if we caught a good one on time we could keep up and get a good ride – and then head back out to try and ‘wheelie’ off the next one coming at us (left and below and top of the page). 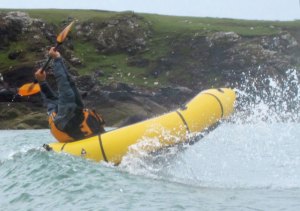 We swapped boats and confirmed the obvious; the $1000 Alpacka blows a hole in your wallet, but it also blows the Intex inflatable squid off the water. They weigh about the same, but it’s down to the Yak’s shape, lesser width and a snug fit to give you control – as well as no rollocks or fish launchers to bash your hands on as you paddle along. By the time I got in the Sea Squak the inflatable floor was soggy so I was sitting about six inches lower than my feet – not an ideal paddling stance in a boat that’s a metre wide. On the way back I tried kneeling, but that soon got uncomfortable. Even then, sunk down and paddling ‘backwards’, stern to front, the Sea Stork still tipped along at 2.5mph without much yawing. So as a packraft the Intex does the job and has got to be one of the best value neo-packrafts around.

PS: Apparently one of the shots on this page was published in the 2012 Alpacka Calendar