“My solution: Gumotex Solar 410C … the difference is ludicrous!”
Happy Gumotex owner after running a Sevylor Hudson for a few years.

Great website – what a wealth of information. I wish I had read it before buying my Sevylor Pointer K2, I would have bought a Gumotex. Never too late; it just costs you more. Anna M.

In my opinion the long-established Czech Gumotex rubber

factory in Břeclav make the best-value, proper IKs in Europe (in North America they’re branded ‘Innova’). All you have to do is pick the best one for your needs. To see the latest catalog, click this.
Gumotex also made some expensive, high-pressure, super-tough models, such as these raft-wide Ks.
In 2011 they stopped selling the Sunny in Europe. The 25cm longer, but similar Solar 410C took its place – and in 2017 it became the near-identical Solar 3.
Compared to some IKs, Gumotex are simple, robust and gimmick free, and over the years the design has been refined: better skeg fitment, better removable seats (but still heavy), lighter material options while keeping

PRVs in the floors. Better push-push valves, a new suppler and lighter Nitrilon, and now with fitted or removable decked boats like the Seawave or Framura.
The sporty Safari (with a 330XL version) the Solar 3 as well as the Swings and the versatile Seawave are all great boats, and the Nitrilon Twists are light. Some might add the old, semi-decked Helios 1 and 2 to that list as well.
I haven’t owned or tried every Gumotex IK mentioned here, but in most cases know people who do- or have. The video below shows what sort of whitewater fun you can have with Gumotex IKs and even canoes.

Gumotex IKs are what I call ‘tubeless’ (this definition has since been adopted by Innova). There’s more here but in short this is the European way of making IKs: simply gluing all the sections into a sealed inflatable vessel, like a packraft. It’s expensive but has advantages over the bladder ‘inner tube’ boats more common in the US.
Most Gumotex IKs are made out of Nitrilon, their version of DuPont’s hypalon: the original tough, EDPM-like synthetic rubber-coated fabric as used on white water rafts that lasts forever but has now been superseded by similar but lighter fabrics.

You might have thought that full-coat Nitrilon over a bit OTT so a few years ago Gumotex introduced LitePack (later called Nitrilon Lite) on low-end IKs like the Twist, with the rubber coating only on the outside. It saved weight but the boats proved to be less durable and Nitrilon Lite was quietly dropped in 2018. (A mate of mine has many failures with his Lite Twists).
As mentioned the current Nitrilon (as on my Seawave) feels thinner and more supple than the original less shiny and stiffer Nitrilon of years ago. Maybe it’s not as tough but I bet it’s lighter.
One thing you should know with Gumboats is that all except the Seawave (and the Ks) are rated at 0.2 bar or 2.9psi, something for which a Bravo footpump is fine. This is better pressure than many other IKs, but not like the 0.3 bar boats from Incept and Grabner. I’ve read of Gumboaters running more than the recommended pressure in the side tubes to make the boats stiffer and more responsive. I suspect they could take it as long as they don’t get too hot out of the water. Running at the recommended pressure can mean that when a boat gets over 3.5m long – like the Solar 3 – it will flex in the swell or rough water. This was a nuisance with my Sunny in roughish seas because it

swamped over the sides.
But even on flat water, long boat flexing can mean reduced speeds if you’re heavy like me. Apart from going on a diet, I considered various ideas to fix that, but in the end settled on a discontinued Grabner Amigo, a basic boat best described as a ‘high pressure’ Solar 3. It was solid as a brick but expensive. I sold the Amigo and since 2014 have run a Seawave which I have adapted in various ways, including running over-pressure side tubes with added PRVs.
For waterside holiday fun to longer touring expeditions, you can’t go wrong with a Gumotex IK. 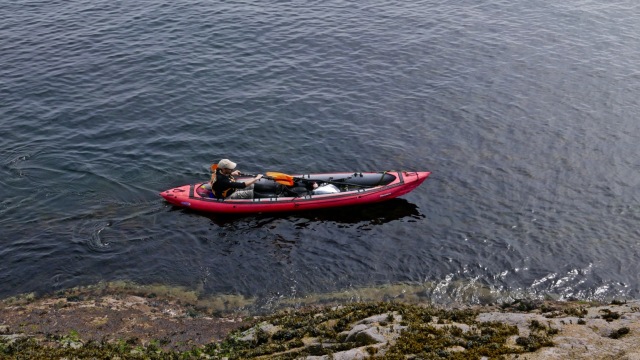