The other day while leaning over aboard a salmon pen platform, my cherished six-year-old Benchmade Griptilian slipped out of the pfd and into the briny depths. We ummed and ahhed about diving down to retrieve it, but I’m told these pens are 20-metres deep and can hold no less than 80,000 salmon.
It was a bitter loss, all the worse when I saw what a replacement cost new. Long story short I replaced it with a similarly anti-stealth orange PBK EMT Rescue Knife from this place on sale for just four quid. Like they say “you won’t worry too much if you drop it off your lifeboat and [it] sinks into the depths.” No I won’t. 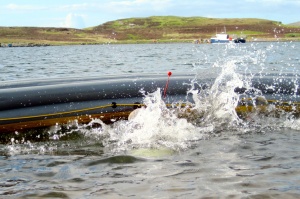 At 150g it’s a bit heavy but locks out with one of those cheap ‘liner’ locks and has a window smashing stud, should I ever find

myself in the nightmarish scenario of being trapped in a sealed aquarium. You also get a pocket clip plus a handy line cutter – a good idea when your packboat begins to acquire yards of lines and straps all adding up to an entrapment risk when expelled from the boat. As it is, I’ve long had a quick-grab Benchmade #8 Rescue Hook permanently attached to my main pfd (see below). With no knife-like sharp point, it’s a good thing on an inflatable running 4.8 psi.

Once you’ve cut yourself free from your boat, the next thing is to alert others of your distress. Gael had a nifty ‘survival’ whistle on our recent Mull trip. This isn’t just any whistle, this is a bona fide survival aid. You also get a thermometre to check on the hypothermia index, a mini magnifying glass for roasting ants and a compass to help evaluate your drift.
All that for just 99p from China, or under four quid in orange from the UK. The only thing that’s missing is some sort of pea in the whistle body to give it a more punchy warble. I tried shoving a lentil in there, but first go it blew out and temporarily blinded me – which was when the magnifying glass came in handy. Search ebay for “4 in 1 Thermometer Whistle Compass Magnifier Survival” and feel safer out there.