I’ve already done a couple of great packrafting excursions around the charismatic mass of Suilven mountain (left, viewed from the east). Last year we did a ‘triathlon’ loop up one side and down the other using bikes, feet and two-up in the Yak; and before that I did an overnighter from Loch Sion to have a look around. That second link has an intro to the region you may like to read. 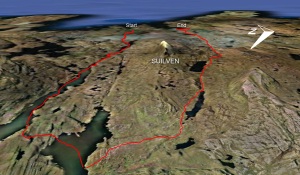 So you’d think I’d know the local pack-potential well, but looking yet again at the map, I clocked an interesting if lengthy day out, packrafting around Suilven. I could walk east out of Inverkirkaig past the Falls to Fionn Loch, then paddle several miles of continuous water south of the mountain to cross a headland and then another short loch. From there I’d turn back passing a couple more lochs to Lochinver back on the coast. That was around 23 miles, plus another 3 or 4 back to the motorbike at Inverkirkaig. An eleven hour day for sure so unusually, I packed a torch.

The day of least bad weather arrived (today’s grim weather, right): overcast and 12°C with winds building up to 25mph bringing showers and afternoon sunshine. It would have to do; the rest of the week was forecast as much worse and at least I’d have backwinds paddling out. Should they become hard to handle I knew I could hop ashore – that’s the great thing about packrating. But I also knew that cross country hereabouts is

usually a gnarly combination of boot-sucking mires, moss-clad boulders and ankle-snapping tussocks of clump grass. Unless you’re a ground slug or sport a rack of antlers, when off piste in the trackless wilds of the far northwest, you’re often better off in a boat.

Nine 15 and I was out of Inverkirkaig with two fat sandwiches, two bananas and a cup. The thickly wooded valley with it’s not quite paddle-worthy river rose up to the 60-foot Falls of Kirkaig, but with filming and whatnot, it wasn’t till 11am that I paddled onto Fionn Loch (left) under

a ceiling of thick cloud on the verge of incontinence. The rounded west prow of Suilven loomed above, trailing it’s cone-like tail like the giant goldfish in the Singing Ringing Tree (right). 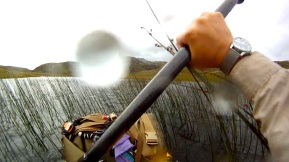 I was reversing the section we paddled last year on the triathlon, and at a narrow point passed some small standing waves indicating a current flowing back to the river. Hmm, strange I thought. Approaching the mile-long narrows which maps call Uidh Fhearna, it was a stage which I’d somehow got into my head flowed east into Loch Veyatie, based partly on this picture I took last year. Turning south round a reedy bend and fighting what I thought was just the headwind, I took another turn and, like some astonished Victorian explorer, found the water flowing west, right at me. Of course it does. At the other end Loch Veyatie, Cam Loch drops through a series of waterfalls, and if Fionn here did the same, where did Veyatie drain – down some tectonic plug hole? There would be no Fellowship of the Royal Geographical Society for me this year.

Even with a backwind, there was no paddling up this Uidh (left), though I’ve read of hardcore canoeists poling it. So I  unplugged the Yak and set off along the north bank to the far end where the Uidh opened out onto Loch Veyatie and lost its current. With no free ride to help outrun the afternoon’s predicted winds, my schedule slipped away. 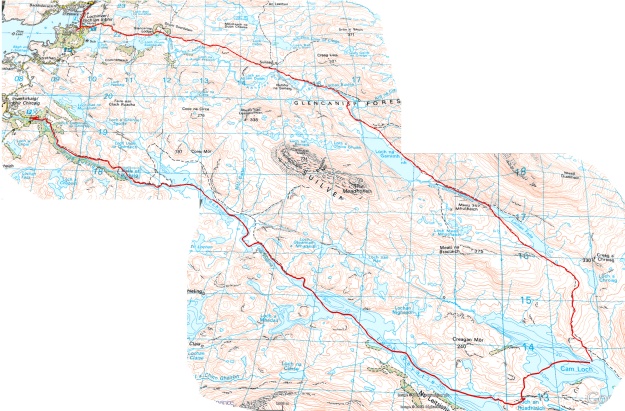 As the OS map shows (left), initially there’s a path as far as a stream a mile away. Who knows why, maybe that’s where folk fish, but of course the path itself becomes a mini river. I should have worn my long Seal Skin socks today, the short ones were already sodden but they still kept my feet warm. After fording the river I decided to continue cross country until it became too hard. That took less than 20 minutes by which time I’d already stumbled twice and, while negotiating one steep bank, actually feel a few feet into the loch! Luckily, no damage done so just up ahead I set my sites on a beach to deploy the raft.
It was now 1pm and with that walk covered at around 1.5mph and getting slower; better to get on the water. But first, for amusement purposes I filmed myself from unrolling the Yak to paddling away. It took 8 minutes, something that you’ll see below is made a little less boring to watch by speeding up fifteen times. 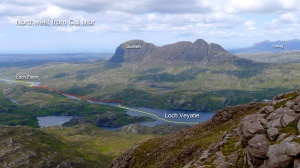 An exposed hour’s paddle down Loch Veyatie ensued. I turned out of the cove into the wind, hurrying for the south shore to get into the southwesterly’s lee until the next narrow point where I’d cross back to the windier north side to line up for my take-out. As I passed across the mouth of the sand-spit inlet of Loch a Mhadail, gusts blasted out fetching up some whitecaps. It’s all in the mind of course, but I really don’t enjoy bobbing about alone, mid-loch and out of sight on a chilly September’s day without a drysuit or PFD

. One good thing with the Animas backpack I was using for the first time was that like my UDB, it doubled as a reliable float bag. Although there was virtually nothing in it bar my lunch and a cag, that was the reason I sealed it full of air. 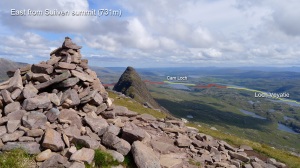 The overhead gloom and rising wind was eating up a lot of nervous energy, but that wind was also pushing me along at what turned out to be 3mph, more than double what I’d have managed staggering along the shore, and more direct too. Another reassuring surprise was spotting the buildings at Elphin on the A837 at the head of the Loch. I’d forgotten how close I’d be getting to the other end.
Paddling with the wind past the south shore, cascades ran off Cul Mor and scraggy patches of original woodland clung to the foreshore. I counted them off on the map as markers to my take-out, and with a dash over to the north side, that came up just as it looked on Google Earth last night. What a great WYSIWYG navigation aid GE is. Let Google harvest all my dreary browsing data to throw back at me as targeted ads. It’s a price worth paying for their sat mapping services.

It was only when I crawled out of the boat and stood still that I realised how strong the wind really was, roaring over the hills and bating down the grass. Even though it was less than a mile’s walk to the other side of Creagan Mor headland, there was no chance of leaving the Yak inflated. Instinctively I headed for higher ground, scattering some deer far ahead, but my route soon led to a cliff so I dropped back into the bog and tussock valley that brought me to Cam Loch’s shore. Here I felt I could relax sufficiently to eat something. My cup was MIA, out on the loch somewhere, so I scooped up a drink by hand. 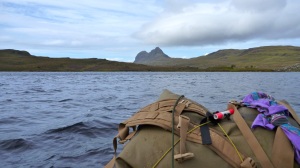 Right then. One more loch to cross; easily done no matter how windy it’s become. Somewhere on the north side the map promised a path that led 12 miles back to Lochinver. All I had to do was slot myself onto it and ride it out for as long as it took. Whitecaps rolled passed me as I neared the north shore of Loch Cam, but what had had an edge of dread on Veyatie just an hour or two ago was becoming familiar and a bit of a laugh as the promised sun stuck its nose out for a sniff at the day. After airing down I soon hooked up with the stony trail, but found I was wavering a little, probably through not eating or drinking enough. It was now 3pm; six hours on the go but I’d only actually walked some 4 miles up to that point, so the legs had plenty left in them and there was drinking water running down the paths. 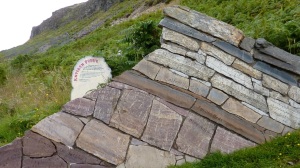 On occasions I’ve harboured thoughts of cycling this path from Lochinver to the A road, but from the state of it at this end I’d not get 10 feet. It followed a hard, white rim of exposed stony rubble that’s visible on a sat image, but I suppose was better than the mush to either side. Light grey and crystalline, I’ve since read it’s Lewisian gneiss or quartzite which gives the appearance of snow to some of the Assynt’s mountains like Canisp or Foinaven (see long image below). This whole region is marked with monoliths, the most striking of course being the remnant sandstone outliers like Stac or Suilven which resisted their brush with the glacier’s claw as it passed through, exposing the ancient base of lighter coloured gneiss.

I’ve kept missing the interesting ranger-led talks at Knockan Crag, just south of Elphin, he site of the Moine Thrust which literally turned geology on its head a century ago. 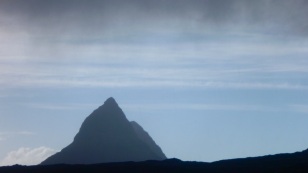 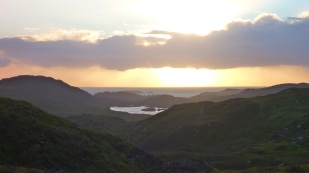 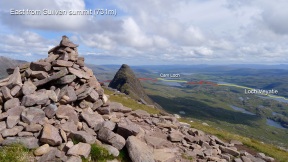 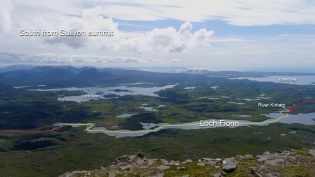 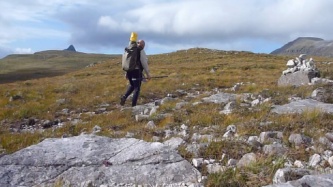 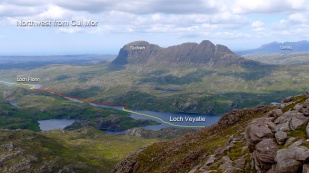 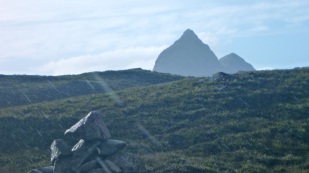