Fabric: Don’t know exactly, a tough, abrasion-proof nylon fabric with a glossy coating on the inside

I’ve been using this big holdall for four years now on kayak and packraft trips in France, Australia, Turkey, the US and in the UK, as well as a side bag on my motorbike. As it’s among my favourites it gets an upgrade to its own page.
‘One dry bag to rule them all’ I wrote back then and my UDB still ticks that box. Your typical roll-top dry bags aren’t submersion proof, yet in paddle sports submersion is a likely scenario. Using roll-tops I found myself packing drybags inside dry bags to keep important things like clothes and down bags dry. With the UBD you can just chuck it in and zip it up.

Initially, I tried using the UDB as a backpack (left) but, like trying to do that with any holdall, it’s only a short term solution that puts a huge strain on your shoulders. Plus I found the harness was poorly positioned so the pack sat high on my back, further increasing the centre of gravity, but running the shoulder straps loose (as left) didn’t work either. It became clear the included harness was not intended for anything more than short hauls. What was needed was a frame of some sort, or a better harness. You can read a summary of my experiments here. In the end the NRS Paragon pack harness suited my needs best.

What I like about my UDB is that it’s a simple, rugged and basic big-ass bag with handy handles and a reliably submersion-proof closure. There are no gimmicks unless you count the purge valve. On the water it eliminates any worries about stuff getting wet and of course it’s something to hold on to if your boat get shot out from under you by a dozy spearfisherman.

Watershed still make bags with drysuit zips – see the gallery below or the website. But they’re either huge or just a bit on the small side or are priced for military procurement departments only. I also used Watershed’s 80-litre  Westwater (above – more like 70L) for packrafting day trips, but pushed it a bit hard on one cross-country MTB ride which ripped out one of the strap fixtures.

Like their handy 30-litre Chattooga day holdall (right, yellow), the Westwater has their slick watershedding fabric which is tough for sure but less agreeable or grippy when pressed against your back all day. And like the UDB the straps have the legal minimum paddling (though are easily replaced). Both use their chunky giant fold-over zip-lock closure which I’m sure works as well as a drysuit zip. But if it had to be one bag it’s my UDB – ‘One dry bag to rule them all’. 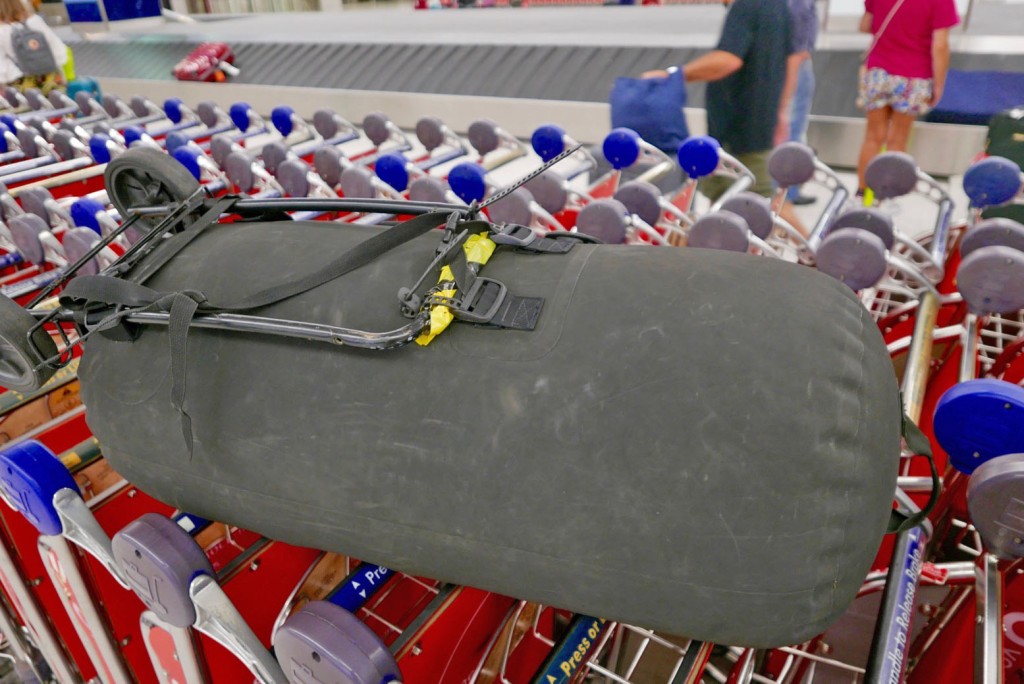 What more is there to say about the Watershed UDB? How about that in 2019 I adapted it with a cheap, chopped-down lightweight, big-wheeled folding trolley (right) from previous packboating trips to carry my packraft to Australia and New Zealand. With zip ties and straps, the trolley frame lashed securely to the rugged UDB’s harness tabs and I could roll it with the top handle. It weighed in at 2.7kg.
Interestingly, the rigidity provided by the UDB once fully inflated (as above) helped make it more comfortable to wheel and less of a sack on wheels. But one thing I did notice is that without a full-length telescopic metal frame the set up tends to bob up and down annoyingly as you walk.

The thinking was that once packrafting a river for a few days (I never made it), the UDB trolley would still be more compact than a regular wheeled travel bag, while enabling wheeling along paths and long gravel roads to get to the river.
It was all an attempt at not blithely splashing out the huge but pricey Ortlieb Duffle RS 140 (left) which I’d been eyeing up. A few months later I eventually did buy a used RS140 for the Seawave but can still see plenty of years use in the UDB.

In a line Surprisingly effective and well-featured carry-all pack harness.

Cost $100 from NRS but no longer made. The Six Moon Flex Pak is similar and a bit more sophisticated. I’ll be testing one of those shortly.

Capacity Vertical strap adjusts out to 1.96m; horizontal straps up to 1.8m. That’s a pack volume of some 200 litres but I imagine anything more than 25kg will be hard carrying. For that you’d want a Lastenkraxe.

Where used On a 200-km walk with packraft along SW Turkey’s Lycian Way. Walking in Umbria carrying a holdall. Day trips with packraft.

Q/d clips make getting to the pack easy.
More comfortable than you’d think
Fully adjustable
Capacity for bigger loads than you can probably lift. Pouches could easily be added to the side straps.

Zip pockets on hip belt too small and awkward to get to.
Not made anymore.
Padding a bit lean over a long day on rugged terrain.

What they [used to] say
The NRS Paragon Pack is the epitome of versatility. Rather than buying an entirely new dry bag, the Paragon™ Pack allows you to retrofit your existing bags into the ideal portage pack.

What’s wrong with a normal backpack?
It took me a long time to find NRS’s Paragon was just what I needed for travelling with a paddle in my pack. It then took another year to get round to testing it properly on a long walk with a small boat.
I admit a decent conventional backpack is better suited to walking long distances over rough terrain with heavy loads. I tried that on my first packrafting trip in Scotland, carrying a giant PVC drybag for my TNF Terra 65 while on the water. Although it’s not happened yet, the problem would be capsizing at which point the roll-top ‘drybag’ couldn’t be expected to seal for long. Because of that, everything inside that mattered needed its own drybag, neither of which would also last a prolonged immersion. All that bagging makes access a faff.

Then in 2010 I got myself my still brilliant Watershed UDB – a 1.1-kilo, 96-litre holdall made from a bombproof fabric and with a chunky drysuit zip – that is drysuit-dry not roll-top ‘drybag’-dry.
I like my Mk1 UDB (also no longer made) because it’s a genuine immersion bag so doesn’t require back-up drybagging of the contents. Zip up the heavy seal and it’s as airtight as your pack boat and good to go. What’s more – especially on a packraft – a bag like this provides 96-litres of reassuring secondary buoyancy should my single-chamber packraft boat go flat on the water.

The UDB came with a rudimentary backpacking harness which, like the handles, were sewn to the bag. As we all know, a load-carrying backpack needs some kind of rigid frame or plate linking the waist belt and the shoulder straps so the weight can rest low on the hips, not hang high from the shoulders. When walking for days with typical 18-kilo loads, that makes a big difference to comfort and stability. The UDB’s token harness wasn’t designed for this and anyway, was poorly positioned on the bag.

As you can read here, I did the usual searches for ex-mil packframes and thought of cutting up a regular used backpack, but not before buying a Tatonka Lastenkraxe (left). That system, based on hunter’s L-frame packframes I’d seen in the US, can certainly carry a load but even with its huge padded straps and belts, at 2.7kg is a bit OTT and clanky for packraft travels. I think these sort of packframes are more suited to man-hauling very heavy loads or relatively easy terrain and then doubling up as a camp stool.

On the Trail
At Gatwick check-in the Paragon slipped easily inside my UDB, avoiding the problem of stray straps getting caught in conveyors or landing gear. At the other end, fitting it took 10 minutes and I was out of the airport on the 3-km walk to the nearest hotel.
I had concerns that the rigidity of the backboard (or ‘lumber support system’) wouldn’t be up to it, but of course once any pack is solidly strapped to a bendy board it can flex with the body but will maintain the rigid distance between the hip and shoulder belts. Only the strap mounting arrangements can come adrift under the load and for me, they didn’t.

My load was around 17-kilos + water and other bits in a small waist bag. That’s one flaw in running a UDB: there are no handy side- or mesh pockets to use, far less a slot to take a 3-litre water bladder. I was planning to rig something up between pack and harness but never got round to it. Early on, the Lycian Way was initially well provided with gushing springs, wells and cisterns meaning I could get by on just a half-litre bottle. Later, I needed another bottle but even then was often parched as the weather warmed up and usable cisterns got strung out.

Once something works OK I tend not to fiddle. I might have tried extending the back length to drive the weight more to the hips. The strap and back padding is not in the plush Lastenkraxe league. While I did have problems managing my balance on the gnarly and awkward coastal paths, in the end I can’t blame that on the Paragon, just the load, the terrain and me.

The lightweight NRS Paragon could easily take my current Seawave IK rolled up for short cross-country portages to and from the water. It will worked well with my other Watershed backpack – the 70-litre Westwater (left). Like the UDB, that bag came with rudimentary shoulder straps but became all the more useful and comfortable as a backpack once strapped to the Paragon. The pictures show a little more clearly how the pack wraps around a bag.

Now I know it works I may look into fitting fatter shoulder straps on the Paragon’s straps and other minor mods. Or maybe I’ll just leave it as it is.