My grand plans to try out my new packframe on a trek from Loch Maree back to the Summers got radically downsized to a day out from Inverpolly. Down at Boat Bay (left) we pumped up the IKs and set off along a route I’d packrafted a couple of years ago.

Surrounded by the singular Assynt peaks, Sionasgaig loch is an amazing place to splash about in a paddle boat, but at kayak speeds that stage was over rather too quickly. Just as well though, as I was trying the Amigo without a skeg, and two-up it wasn’t working. Into the wind was possible with one paddling, but out on Sion with a side wind, even with one in control the lighter back kept swinging off the wind. We put a bag in the back, but at the Sluice Portage (above) we had to commandeer the skeg off Craig in the Gumo Solar who up to that point was loving his day out on the lochs. I assured him the Solar was manageable without a skeg as long as he applied appropriate levels of paddling finesse. This low level, almost sub-conscious correction to the tracking is something that’s difficult to achieve when two people are paddling one boat. It’s a shame that a skeg is such a vital accoutrement – or is it?
We’d all want them for the Enard Bay sea stage, so at the end of Loch Uidh Tarraigean, g-friend nipped back a couple of miles to the car where the forgotten skeg hopefully lay under a seat. By the time Craig and I had portaged over to little Loch na Dail, crossed it and walked up to the road, the car arrived with the errant skeg.

After lunch we rolled the boats up, coasted down to the fish hatchery on the River Polly and set off down the track towards Inverpolly Lodge and Polly Bay beyond. We’d crept up here on our bikes a few months back, to check out ‘Loch Sal’ bay north of the lodge. There’s boat ramp and fish pens there, which was good to know when I passed a while later on my Enard Bay paddle to Lochinver.

First time there and Polly Bay glittered invitingly at low water. On with in the skegs, in with the air and out we go into the flat calm. While exploring a bay round the corner, Craig managed to spot an otter gnawing over its lunch at the back of a chasm. Not noticed one of those out here before.
We worked our way around the coastline fringed with kelp exposed by the very low tide. Further along, winkle pickers were at work at Garvie Point, but then cloud rolled in on an annoying north wind; that is why you want skegs at sea. The little Solar bobbed about on the waves, but Craig seemed to be managing fine. We edged round Camas a Bhothain bay – no seals at play today – and slipped through the reef into Achnahaird Bay. 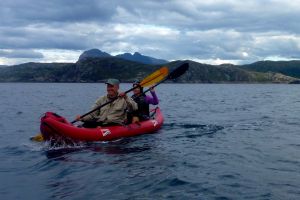 It was now quite chilly and my proposal to form a holding pattern for three hours until the spring tide filled the bay was roundly vetoed. When Achnahaird Bay fills right up on spring tides, you can paddle up the Loch Raa outlet stream almost to the road junction car park, for the short portage to Raa. As it was, there was enough flow to tow the boats all the way up. We’d left a bike here so the Mrs cycled back over the hill to get the car, while Craig and I paddled across Loch Raa and then to the north side of Loch Vatachen. I did this bit without the skeg and was reassured to find that one up the Amigo tracked at least as well as the Sunny did in the same state. Perhaps it’s all down to more centred weight and the aforementioned correcting finesse. I’ll be on the River Spey in a couple of weeks where it’s good to know a skeg won’t be needed.

On the north side of Loch Vatachen we aired down for the short but arduous slog up the hillside to the peat track that leads back to Polbain, a more direct route than following the road. Maybe it’s down to late summer growth, but the grassy tussocks and toe-dragging shrubbery made for an exceedingly tiresome, one-mph haul. Each step required lifting to knee height, and crossing the boggy stream course midway ingested one of Craig’s cherished flip-flops (left). Struggling a bit with his kayak in a shoulder bag, I was amazed it had managed to stay with him that far. My well-used Teva Omniums clung better to my feet if not the ground, and the heavily loaded packframe sat securely on my back, but I wouldn’t want to spend all day doing this.

By the time we reached the peat track where locals periodically  excavate their allocations, the sun was setting over the Assynt peaks to the northeast. From here it was a short downhill walk to the village and, after some 12 miles, attending to all the food that was fit to eat. 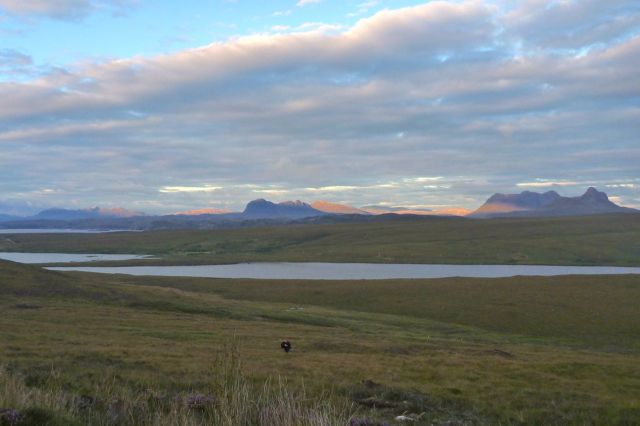 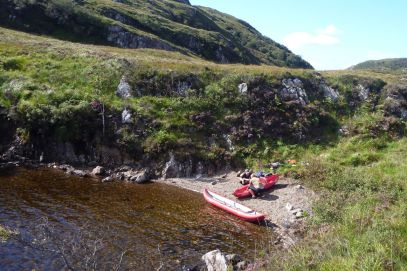 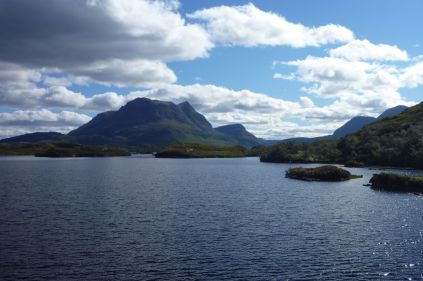 Sluice portage from above 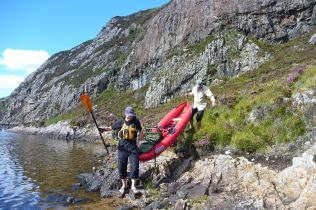 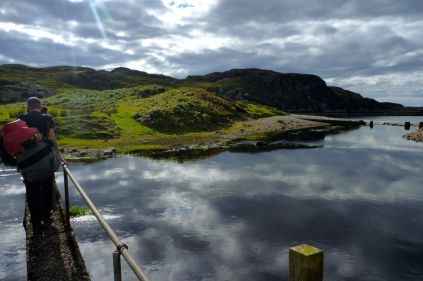 Bridge by the shore 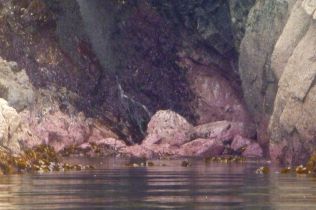 Coming in to Achnahaird

Wading up the Raa stream

Sinking in the mush

Final haul to the peat track